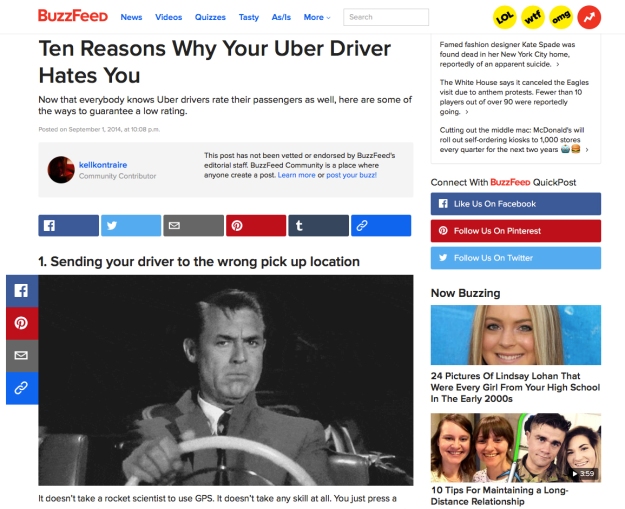 Back in August 2014, I wrote an inflammatory blogpost entitled “Your Uber Driver Hates You” covering the news that Uber drivers rated their passengers and most users had shitty ratings. Which helped explain why some folks would have a hard time getting picked up.

I followed that post up with a whimsical listicle on Buzzfeed called “Ten Reasons Why Your Uber Driver Hates You,” using various gifs to create – what I thought – was an amusing guide for Uber passengers on how to improve their ratings.

It got a shit ton of traffic, and loads of comments. But for some reason, when I visited the page today, there are no comments. Maybe it’s just a glitch or something, but the thing got some visitors.

This is the first six days:

The rest of the month:

While I’m sure those numbers don’t mean much to the big sites that generate 100s of thousands of page views per day, it’s not bad for someone with just an idea and an internet connection.

But I am pissed off about one thing…

Even though I was the first blogger to use the term “your Uber driver hates you,” numerous articles have come out since August 2014 on higher trafficked sites using the exact same title and basically pushed me down in the search ratings.

Not surprising, of course, since this is how media works. Those who toil independently, whether online or in print, will always get painted over by the broad strokes of the mainstream media.

Anyway, the reason I’ve been rummaging through all these old posts is because I started a new site to collect images from the “your uber driver hates you” sticker campaign.

You can check out the early stages here:

1 thought on “Your Uber Driver Hates You”