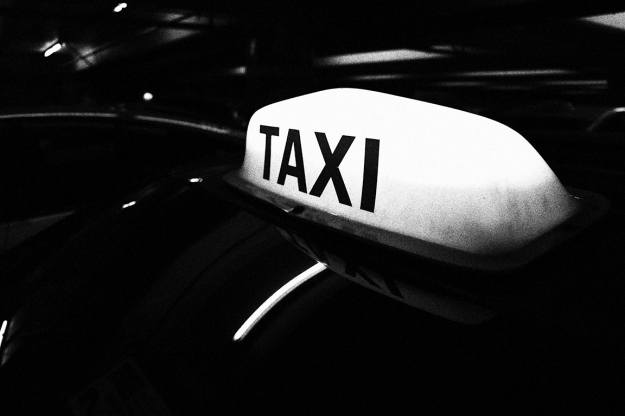 “Hey, cabbie! Can you turn up the music?”

“Oh, sure,” I grumble and twist the volume knob to the right. At least the hip-hop is drowning out the chuckle fest between the guy and girl. I don’t even want to imagine what they’re doing back there. I just keep my eyes on the road and the side view mirrors, grateful it’s a short ride.

“That was the plan,” I say under my breath.

The guy has been shouting directions in my ear all the way from the Travelodge on Valencia and Market, as if there were more than one way to get to Civic Center.

I slam on the brakes in front of the library.

“I always like to support you real cabbies. I don’t fuck with Uber, man.”

It takes a few minutes for them to extricate themselves and all their possessions from the cab. Once they’re clear, I speed away and take McAllister to Polk. I’m still grumbling to myself when the dispatch radio crackles to life.

“Drivers, the opera is breaking. They need cabs on the Grove Street side.”

“Sweet!” I make a beeline to Van Ness and catch the light. Before I can pull into the driveway, where a line of people are waiting for rides, two elderly men in matching black tuxes flag me down on the corner.

As they open the backdoor and the dome light comes on, I look over my shoulder and gasp. The seat is speckled with white powder.

“Ahhhh…” I stammer and try to think of a way to deal with the situation. Do I just say something?

I recently discovered that if you park your cab on Van Ness and Oak at 2 a.m., with no headlights and the top light off, while the passenger in the backseat is looking to score drugs, almost everyone who walks past will try to solicit a ride.

First, it was two guys with suitcases, who seemed to emerge from thin air. Standing next to their luggage on the curb, smoking and laughing, they continuously glance inside my taxi. Much to the chagrin of my fare, a guy I picked up in the TL who told me his name was Cricket.

“What are these assholes doing?” Cricket wonders aloud. “They’re going to spook my guy! Get rid of them!”

“Tell them to fuck off!”

So far, I’ve just been avoiding eye contact, figuring they’ll get the message eventually. A few seconds later, one of the guys steps into the street and flags a passing cab.

“See, they just needed a taxi,” I say. Then add, wistfully, “Perhaps to the airport …”

A few minutes later, an old man approaches my taxi.

“Cabbie!” he yells across the street. “Cabbie! I need a ride!”

“Now what?” Cricket moans. “Goddamn it!”

I roll down my window and tell the old man, “I’m not available. Sorry.”

“But I already have a fare,” I explain. “Another cab will come by shortly.”

“Ah, these motherfuckers won’t ever pick me up!”

I try to offer some reassurance but he brushes my comment away with a wave of his hand and wanders down the street.

Who knew this seemingly desolate spot in The City would be such a hot spot for rides?