There for a while I seriously questioned my decision to leave National to drive for Yellow, even though the defection was far from spontaneous. Prior to walking down Upton Alley to try my luck at another cab company, I mulled over the prospect for several months. Like Gregory Hines in the movie White Nights, as he planned an escape from the Soviet Union, I wasdetermined and reluctant at the same time.

Unlike most Refuseniks, though, I was riddled with regret and consternation shortly after making the switch, convinced it was a huge mistake. The transition to Yellow has been anything but smooth. Besides the flat tire and broken window detailed in last week’s column, I had a blowout on the Bay Bridge during my first shift in a Yellow cab. Three weeks later, I got into a minor no-fault accident on Mission Street.

Then there were the Yellow policies, which took some getting used to. Unlike National, everything at Yellow is by the book. Taped to the cashier windows are signs with statements like “No exemptions!” That’s how I ended up over-drafting my bank account in February: paying up front for 24- hour shifts and not getting reimbursed for credit card/Paratransit transactions until a week later.

Once my finances were completely out of whack, the despair and economic hardships overwhelmed me and I had to take a break to regroup. At first the anonymity of driving a Yellow cab was appealing. But I quickly began to feel isolated. Whenever I ran into a National/Veterans driver on the streets, I eagerly inquired about the company. Who’s still in the office? What’s going on with the meters? Have they fully transitioned to Flywheel yet?

The Flywheel deal was always a dealbreaker for me. When rumors first to began circulate that National was going to replace their hard-wired taximeters and two-way radios with the Flywheel app, I railed against the idea of an app-based dispatch system and letting a third party take over the mechanics of running a cab.

Nowadays, if you don’t want to run the Flywheel app, you need to be in a Yellow cab.

Still, I don’t handle change well. I’m a very habitual person. Part of growing up a welfare case: after bouncing around foster homes, group homes and relatives’ homes as a teenager, I craved stability as an adult, always seeking a temple of the familiar. 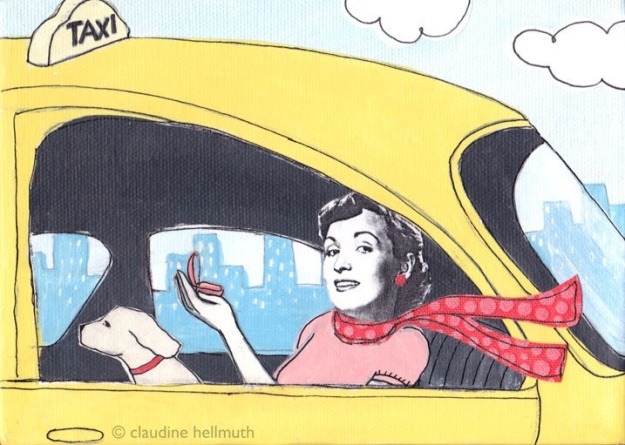 It’s all about the radio…

Back in the day, Veterans Cab was the premier radio company in San Francisco. Veterans drivers would pass up hundreds of street flags on their way to pick up one radio call. They had accounts throughout the Financial as well as most top-rated restaurants and bars across The City. If you wanted a cab to actually show up, you didn’t call Yellow. You called Veterans.

That’s all history now, though, of course. Over time, Veterans became Arrow Checker when National bought Veterans, then Arrow went under and the last of the Veterans accounts were either squandered or lost to Uber.

What little radio business National was able to hold onto had all but dissipated by the time the new owner decided to implement a Flywheel branded, app-based dispatch system.

When the two-way radios disappeared from all the National/Veterans cabs one day, hardly anyone noticed.

Ever since the idea of transitioning to soft meters was first suggested, I vehemently opposed it. I just want to drive a cab, I repeatedly told the manager at National, equipped with a traditional taximeter. Why fix what isn’t broken? Besides, the countless problems I’d had with the Flywheel phone vastly outnumbered my one incident with the taximeter.

Technology is wonderful, sure. When it works.

Without a radio, you end up just working hotel lines and prowling the streets for random fares, hoping for the occasional Flywheel request. As long as there aren’t any server issues, that is. This strategy can lead to some very boring, unprofitable shifts.

Even though I rarely play the airport, the SFMTA’s new policy determining which cabs get preferential treatment at SFO eliminates another source of fares.

So what’s a cab driver who just wants to serve the people of San Francisco supposed to do?

I had a 24 year old kid in my taxi this weekend who asked me the same question I get asked all the fucking time: “Ever thought about driving for Uber or Lyft?”

I always respond the same way, as I try to deflect the question and change the subject: “Don’t own a car.”

Further inquiry usually ends there, although some people know it’s possible to easily acquire a car to drive for Uber and Lyft, as these companies continue to make it incredibly simple for anyone with a pulse and halfway decent background history to drive for hire.

Well, this kid didn’t know about leasing options that Uber provide, thankfully, but he went on to tell me, in his opinion as a resident of Concord, how the San Francisco taxi industry failed and how, if they’d had an app early on, Uber and Lyft wouldn’t have bankrupted the cab companies.

I point out that Cabulous, which became Flywheel, predates UberX, which didn’t launch until Summer 2012. So, yes, taxis had apps even before Uber.

“Think about it…” I say to the guy. “Everyone’s trying to come up with ideas for apps… hailing a cab isn’t that original, especially in a city like San Francisco, where, as any longtime resident can tell you ad nauseam, it was next to impossible to get a cab. So coming up with an app to summon a taxi in San Francisco is kind of a no-brainer, right?”

The argument that taxis have failed to adopt to technology is crap. It was the cab companies who resisted both centralized dispatching and app-based dispatching out of pure greed and lack of foresight.

The drivers themselves, obviously determined to maximize their profits, have been experimenting with apps from the beginning.

Drivers use every ride-hailing app available, to varying degrees of happiness, and will no doubt praise and criticize any others that come down the road.

Drivers who don’t want to use their cab company’s Veriphone credit card processing get Square instead.

Drivers are also so determined to cross color schemes, several hundred us use the GroupMe app to communicate with each other in real time. Throughout our shifts, we post updates on when events are breaking and to let each other know where demand is high, which is similar to Uber’s heat maps or Lyft’s weekly email of upcoming events, except the information in the SF Hackers group is based on actual eyes-on-the-street reports and an actual comprehensive listing of all concerts and events provided by one of the members, who also happens to be a dispatcher.

Undeterred, to prove that taxis are the cause of their own demise, he brings up the price difference between taxis and Uber/Lyft, even though I immediately counter with the fact that when UberX and Lyft both started, they cost more than taxis and have only lowered prices to compete in a race to the bottom. And anyway, in the end, we all know Uber is only interested in logistics.

The issue is moot.

I guess Cabulous/Flywheel, Taxi Magic, Summon and all the other taxi-hailing apps, which could have provided San Francisco’s much needed centralized dispatch, just weren’t as sexy as the “Uber-iquitous” U symbol everyone has come to love and/or hate.

Anyway, this week’s column for the S.F. Examiner is about centralized dispatching.