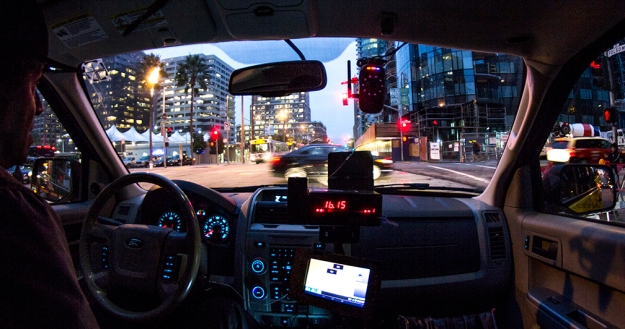 This week’s column for the S.F. Examiner is about the one thing you can always count on when driving in San Francisco…

Thursday afternoon. The Financial District is popping. In Google Maps, downtown San Francisco looks like an open wound. Every street that leads to the freeway is bathed in blood.

For several hours, the Hyatt Regency is load-and-go.

According to one of my passengers, there was a 900-person conference at the hotel and, apparently, everyone left at the same time. With that kind of spike in demand, all car services are maxed out.

The doorman’s whistle never stops blowing. As I’m trying to make a U-turn on Drumm, the doorman singles me out:

I pull into the driveway, angering a large crowd waiting on the curb with their arms out.

Since most people are going out to dinner or drinks, the rides are short enough for me to drop them off and return to the Hyatt within a few minutes.

After a while, the doorman starts getting friendly with me. He even lets me wait in the driveway when I pull in preemptively, asking everyone who walks through the door if they need a taxi. Several wrinkle their brows.

While I’m taking a fare to the Fairmont, a lady tries to flag me at Sacramento and Drumm. I point to a Yellow cab in the Regency taxi stand.

“By the time I cross the street, they’re always taken,” she says.

“Just wait for the next one,” I reply.

“Good luck with that,” the guy in back says. He tells me the wait time was more than 20 minutes for a Lyft.

Even Flywheel is showing signs of life. A few seconds after dropping at Tosca Cafe and turning on the app, an order comes in. It says nine minutes from Broadway and Montgomery to Sacramento and Front. But I make it in four.

The woman I pick up tells me she’d been trying to get a ride for half an hour.

Finally, a fare to 42nd and Judah spins me out of the metro area. From the Outer Sunset, I head to SFO …