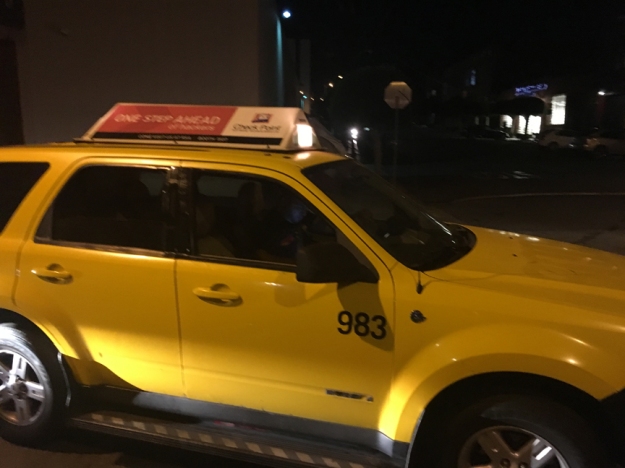 Wouldn’t it be nice… to run a taxi without paying gates or commercial insurance or any permits to the city… think of all the cash you’d be raking in. Well, the guy who’s running this illegal taxi has been doing just that. And getting away with it.

I first spotted him on October 8, 2016, outside the night club Mighty on Utah at 15th Street. Once I saw the taximeter on the dash, the official looking ad topper that adorns most Yellow SUVs and a brightly lit toplight that clearly read TAXI, I confronted the driver, asking if he was running a gypsy cab. He promptly told me to fuck off. So I took these pictures. I tried to take some video of passengers getting into his illegal taxi andhis top light going out when he hit the meter, but my phone didn’t cooperate.

The medallion numbers on the side 983 don’t belong to a working Yellow Cab, according to the Yellow taxi company (we checked). So this is obviously a decommissioned taxi from their fleet that the driver probably bought in an auction. Or he may be a former driver for Yellow, or a mechanic. It would seem that he has some experience in the taxi industry. 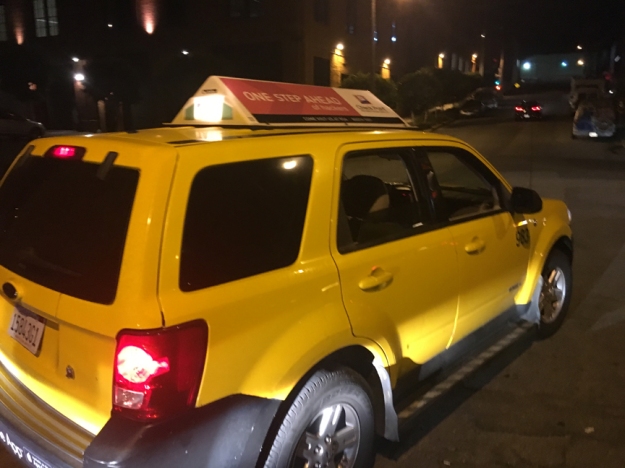 Most of the markings have been removed. The permits, obviously, the “SAN FRANCISCO TAXICAB,” along with Yellow’s logo and phone number. The license plate is not associated with a Yellow cab, even though it’s a commercial plate. More on that later though… 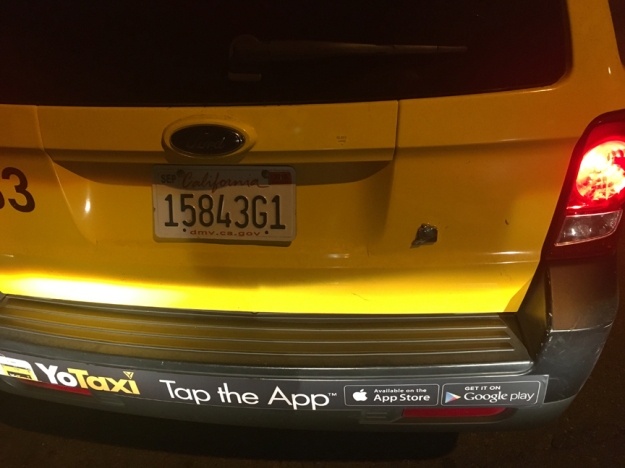 In December 2016, taxi driver Barry Taranto took this picture of the same illegal cab. Notice the license plate is different. 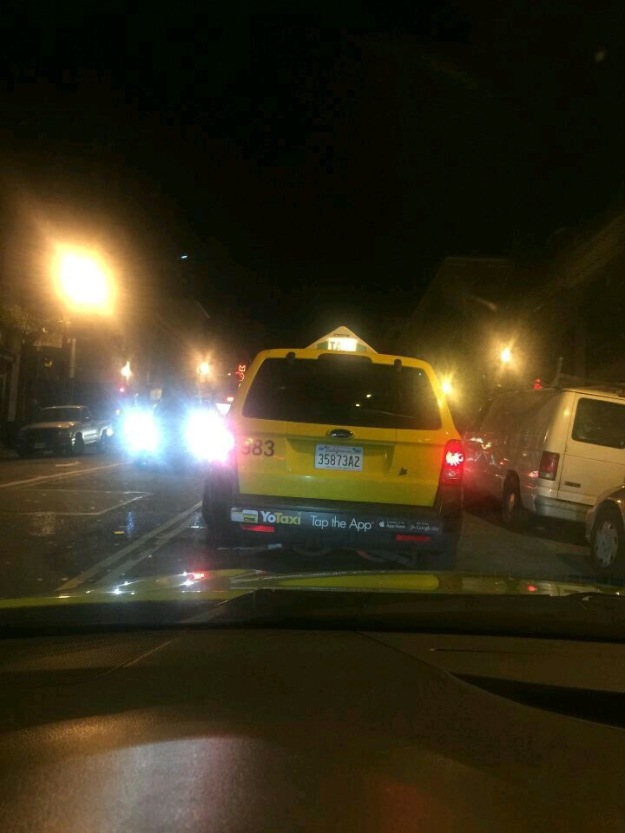 A Fog City Cab driver took this next photo of the illegal taxi parked in the Tenderloin with a license plate in the dash, which matches the plates on the first photos I took. 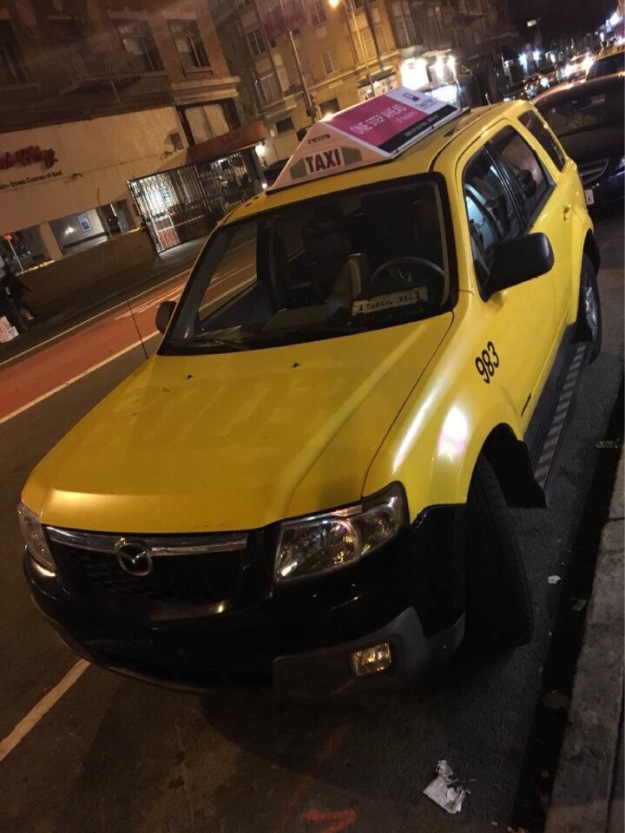 Over the past several months, the SFMTA taxi division was notified. Since the driver usually parks the vehicles in the TL, without any concern of getting in trouble, an enforcement officer with the SFMTA went by and left a note under the windshield wiper with his number. The gypsy cab driver, surprise, surprise, didn’t call.

Since then, drivers continue to report seeing the illegal cab all over town, as well as consistently parked in the TL, near where the driver apparently lives.

Last week, on Larkin, I saw the cab parked outside New Century Theater and noticed he’d covered the medallion numbers with electrical tape.

Barry Taranto took the following photos outside Badlands on 18th Street in The Castro on February 13, 2016. Notice the license plate is different again, although still a commercial plate. So we know he has at least three plates. 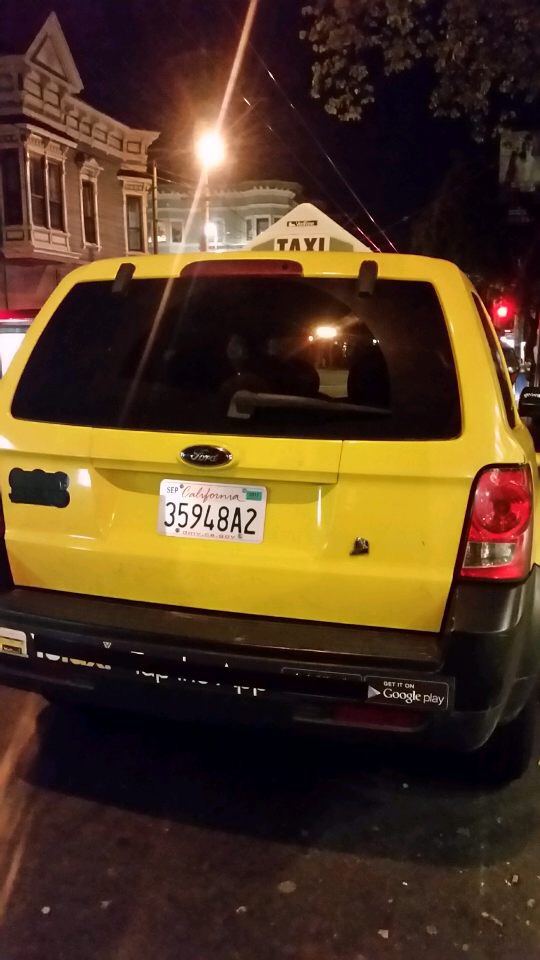 Despite covering the medallion number and the YoTaxi markings on the bumper, he still has the same ad topper and… 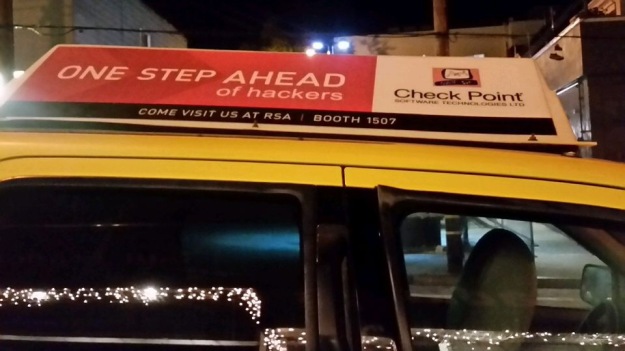 A functioning taximeter on the dash. 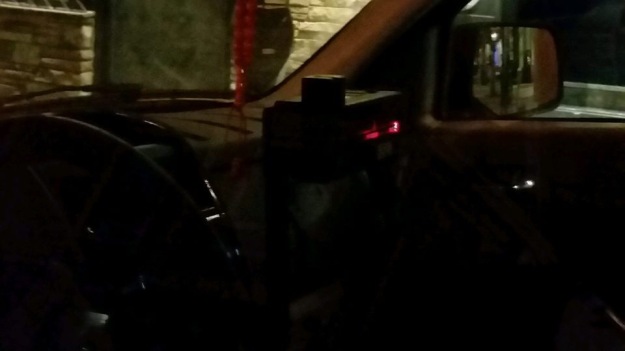 Out of curiosity, a taxi driver looked up the license plates on the DMV site. Two came back without a match, but the first one has $700 worth of fines associated with it. 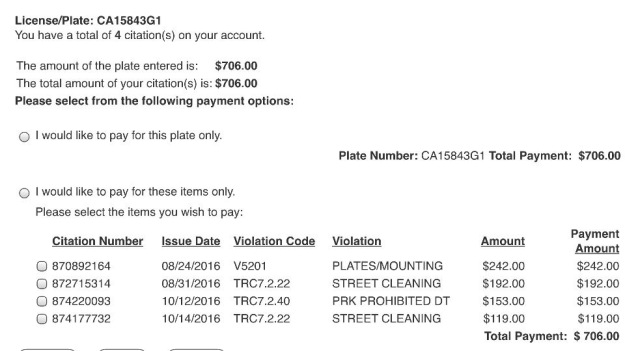 BTW, this is the real Medallion 983. It’s a Flywheel taxicab. According the SFMTA database of medallion owners, 983 belongs to Samra Bikramjit. 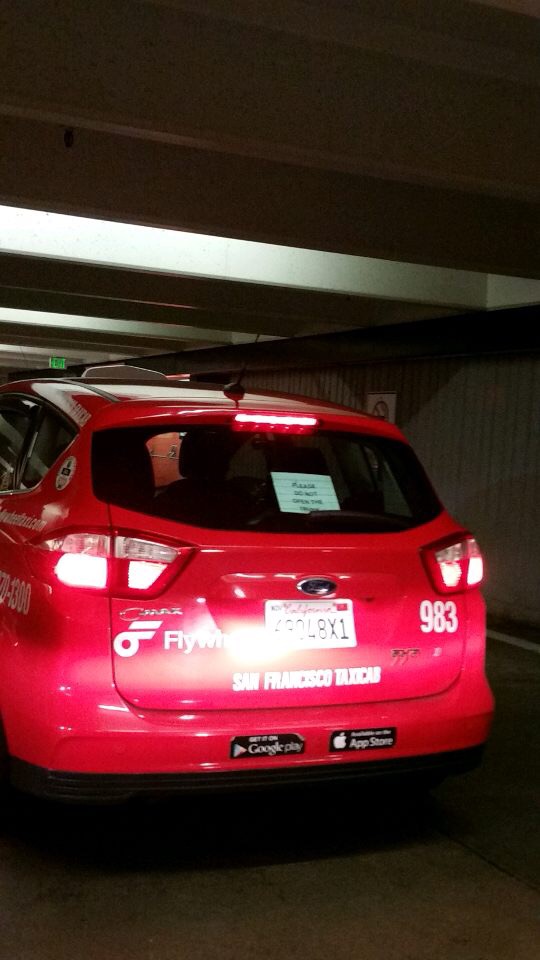 Essentially, this a lesson to all aspiring scofflaws in this city. You can do whatever the fuck you want and never face the consequences. Why lease a taxi from a cab company? Why pay gates? Why pay for permits? Why do anything but get a decommissioned cab with a taximeter and a toplight and go make some serious cash on the streets of San Francisco?

It’s not like you’d ever get busted. After all, we’ve known about him for at least 5 months. Who knows how longs he’s been at it and how long he’ll continue to get away with it until someone stops him.

1 thought on “The Gypsy Cab That’s One Step Ahead”