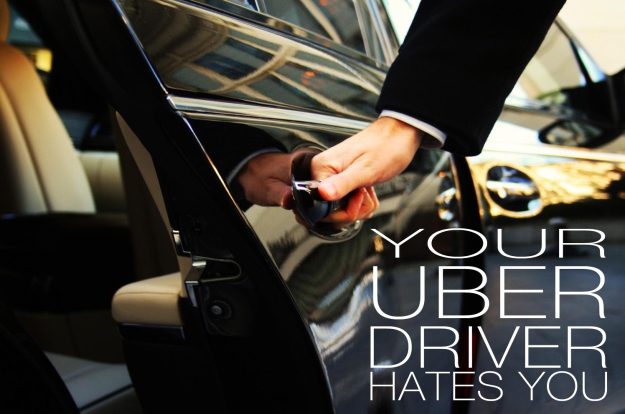 TOO MUCH TO READ? THEN CHECK OUT THE LISTICLE

This post originally appeared on my previous blog on July 21, 2014

Where would the peer-to-peer economy be without trust?

Nobody in their right mind would give a complete stranger the key to their apartment or get into a random person’s car if they didn’t have faith in the safeguards enforced by the companies that function as intermediaries. Airbnb, Uber, TaskRabbit and Lyft use Facebook accounts and/or cell phone numbers to authenticate the identities of their users, but miscreants can always find a way around those barriers. Ride-hailing services rely on background checks and driving records, which have been proven over and over to be far from foolproof. Then there’s the feedback system that’s supposed to ensure a quality experience for both parties, though it’s just as easily skewed.

In theory, the rating system used by Uber and Lyft allows riders to anonymously inform future passengers what to expect from their driver. As a driver, unless you’ve only given one ride that day, you never know which passengers rate you what. Like internet comments, this anonymity gives riders complete freedom to rate and comment without fear of reprisal. And they take full advantage of this liberty, which is reflected in most drivers’ low ratings. It’s almost impossible for a driver to have a 5 star rating for more than a day or two, unless they are in line to be sainted by Jesus Christ himself. 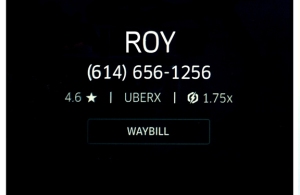 The rating system is supposed to convey trust, but an unintended side effect seems to be taking hold. Uber and Lyft drivers are using the same rating system to secretly warn other drivers about problematic riders. And they are just as unforgiving as their passengers.

As a passenger, you know your driver’s rating. It pops up when they accept your ride request along with their picture and car details. But you never see your own rating. If you did, you might be surprised to discover how the people who drive you around town actually feel about you.

While Lyft drivers tend to get along well with their passengers, Uber drivers, for the most part, think their riders are assholes. 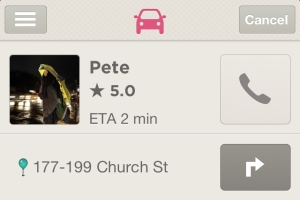 Uber and Lyft distinguish themselves by how passengers interact with their drivers. Lyft’s “friend with a car” vibe encourages passengers to sit up front and chat with the driver during the ride. Uber, on the other hand, wants their passengers to feel like they have a personal driver, so they sit in the back and rarely say much besides hello and their destination. Who converses with servants anyway? Your flunky should be seen and not heard, right? Would you chat with your chambermaid while she’s cleaning your potty? Of course not!

Many rideshare customers, especially in San Francisco, use both platforms depending on price surging, availability or what kind of experience they’re in the mood for. I’ve had numerous passengers tell me that when they’re going to work, or in work mode, they take Uber so they don’t have to deal with any annoying conversations. But on the weekends, or if they’re going out, they take Lyft because it’s more fun.

Price wars are also a factor.

As a driver for both Uber and Lyft, you can easily tell which passengers use Lyft regularly and which passengers prefer Uber. And not just by where they sit or whether they talk to you, but through their ratings. 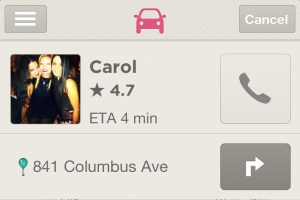 Most Lyft users have 5 stars with the occasional 4.9. Those with a 4.8 rating are generally the ones who sit in back and stare at their phones. These are your Uber passengers, reluctantly slumming it with Lyft. They get in your car and immediately say, “I’m not going to do the fist bump, so don’t try it.” They express contempt for the pink mustache and seem relieved I don’t have one. They make it clear that they are only using Lyft out of necessity. I find this attitude amusing, though based on their rating, Lyft drivers have no doubt rated them low in the past for not playing along with the Lyft modus operandi.

Since the main difference between the Uber and Lyft experience is the talking, and the passengers with less than 5 stars on Lyft tend to be incommunicado during the ride, it’s not much a stretch to conclude that drivers hate being treated like a “personal driver” and they rate passengers lower for being unsocial. Regardless of which platform they are on.

Now, you might be thinking, aren’t Uber drivers supposed to just get you where you’re going and keep their trap shut?

Sure, but they’re still humans with feelings. So while you sit in the back seat, browsing Facebook to keep you distracted, your driver is seething with animosity at your entitled and unfriendly attitude. The only recourse he or she has is to use the feedback system to rate you accordingly, and that’s a 4 at best.

Very few Uber passengers have 5 stars. In fact, the percentages are completely reversed with Uber. From what I’ve seen so far, 95 percent of Uber passengers have 4.9 or lower. Those users with 5 stars have all started conversations with me, which makes it clear how they got their elusive 5 stars. In fact, after carting around a bunch of people for Uber who barely say hello and thanks, getting a talkative passenger is like finding a fellow countryman in a foreign land.

Face it, Uber users, when it comes to being a passenger, you suck!

Drivers are People Too

Last year, somebody figured out how to hack the Uber site to get passenger ratings. Twitter lit up with people posting the link and their ratings. Only a few had 5 stars. Some thought it was funny how low their ratings were, though most were chagrined by what they found.

Uber quickly put the kibosh on the leak, but I couldn’t help but wonder at the time if that brief window into the reality of passenger ratings might have finally alerted passengers that they’re not immune to criticism just because they take advantage of a frictionless payment system.

Bidirectional ratings are just that: they go both ways.

Nobody likes negative ratings. Drivers complain about their ratings all the time. It’s not easy making people happy. Even when a ride has gone perfectly, there is never a guarantee that the passenger will be satisfied. 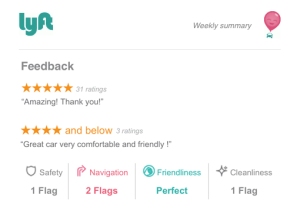 While I always rate passengers 5 stars, even when I’ve had to deal with some real stinkers, my passengers haven’t been as generous with me. Like other drivers, I’m always shocked when my rating goes down. Lyft considers a 4.8 rating “awesome,” but it still hurts to think that I’ve failed to do my simple task of driving a car, something I’ve been doing in cities across the country going on twenty-five years now.

When I get my weekly summaries from Uber and Lyft, I wrack my brain thinking of how I might have messed up or disappointed the passengers who rated me lower than 5 stars. It usually happens after a good night too. Nobody ever gives any indication they are dissatisfied with my driving. Which is why I’m convinced the passengers who converse with me must think I’m some kind of freak for talking about art, literature, architecture, geography, the history of San Francisco and the way the city spreads out across the sky from the top of Potrero Hill. And they hate my music: that dreadful rock and roll nobody listens to anymore.

For every person who finds me entertaining or interesting or feels a kindred spirit with me, there are those who rate me less on my ability to get them from point A to point B and more on an inscrutable formula that only makes sense to them. And while I can usually navigate the city from memory, avoiding traffic jams and unpleasant streets, and maintain a relatively intelligent conversation along the way, in the new San Francisco, that’s only worth three stars. Four at best. 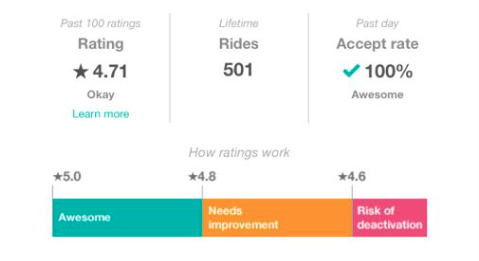 The More You Know…

Maybe if passengers knew what their ratings were, they might want to protect them as much as drivers do. Perhaps it would make them a little less demanding as well. So I missed a turn. Big deal. So I went in a direction that had too many stop signs. Whatever. So I want to tell you how my cousin’s girlfriend has the same name as you when you’re in the middle of reading an email. Get over it! After all, it’s easy to be judgmental when you’re the one with the gavel. Flip that shit around and it’s not as much fun.

The Uber ratings leak also raises the question: why don’t rideshare companies show passengers their ratings in the app? Don’t they want passengers to improve?

Could it be that Uber and Lyft don’t want customers to know their ratings because they mean nothing? The only real consequence is that some drivers won’t pick up passengers with low ratings. Otherwise, what’s the likelihood that a paying customer will be kicked off the platform for having a low rating? Not bloody likely!

The rating system is only there to keep drivers in check. You drive with the constant fear that if your rating slips too low you’ll be deactivated. Thus, it’s no wonder drivers have begun using that same system to strike back at what they don’t like about their own experiences. Even if the passengers never find out.

So the next time you take an Uber or a Lyft, why not ask your driver what your rating is. You might just be surprised how big of an asshole you really are. 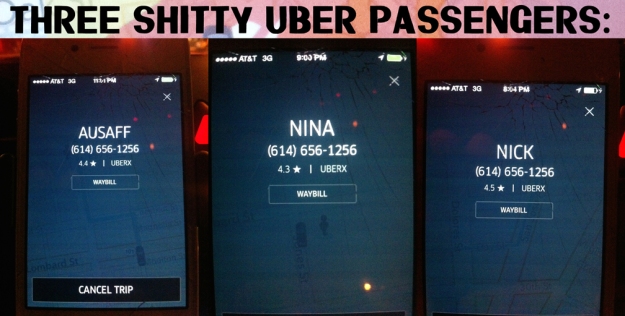 Don’t want to be a shitty Uber passenger?

THEN READ THIS AND DO THE OPPOSITE: TEN REASONS WHY YOUR UBER DRIVER HATES YOU