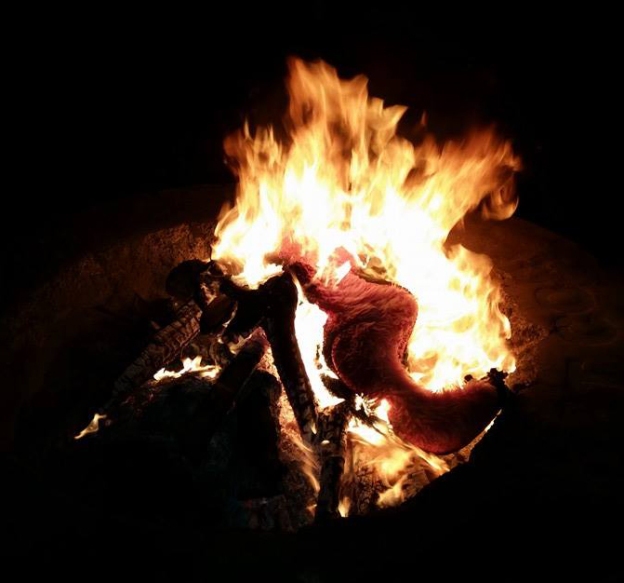 A few weeks ago, when I posted the cockeyed, ad hominem attack piece How to Fix Ridesharing: Kill Lyft, I knew it was going to be an incendiary post. Lyft loyalists responded with their usual derision over anything they perceive as anti-Lyft. Commenters were quick to label me a disgruntled ex-driver and an idiot, calling my logic primitive, retarded and stupid. Others pointed out that I understood nothing about how to run a business and that I was missing “a key part of the equation.”

Now, I’m the first to admit I’m no businessman. I’m certainly not the sharpest crayon in the box. And I’ve never claimed to be an authority on the subject of ridesharing other than being a current driver with a 4.9 rating who pathologically reads every article on the subject that crosses my Facebook dashboard and Twitter feed. I also pay close attention to the posts and comments on all the Facebook driver groups that I haven’t been kicked out of yet. I know how easily offended the Lyft faithful are. So I wasn’t surprised by the vitriol my post received.

But in their ardent support of the Lyft brand, my detractors failed to grasp that I was actually championing Lyft’s main tenets. I prefer driving for Lyft. I think they are a much better company than Uber. Which is a common refrain among drivers. Ride.Share.News recently did a survey and found that the majority of drivers prefer Lyft. Which makes sense. Unlike Uber, the Lyft app has many features designed with the driver in mind. The app automatically notifies the passenger when you’re getting close to their pinned location, as well as when you’ve arrived. It even starts the ride within a few minutes of waiting, which addresses one of the biggest frustrations of dealing with passengers: the wait.

Another frequent gripe about driving is being ignored and treated like a servant. Lyft’s “friend with a car” slogan is not only in the true spirit of ridesharing, and what most of us signed up for, it also makes for an enjoyable ride. But the greatest aspect of being a Lyft driver, of course, is the ability for passengers to leave a tip. As a regular Uber driver, I know that without this option in the app, 99.9% of passengers do not leave a tip. They signed up for a service so they wouldn’t have to worry about having cash on hand, so it’s understandable. Albeit unfortunate.

Of course, not knowing what you’ve made until the next day, the overall demanding attitude of Lyft passengers (no, I’m not your fucking DJ and no, I don’t have any candy for you), that stupid pink mustache and the forced homogeny make driving for Lyft less appealing to me, but for others that’s the main draw.

So… do I really think Lyft should be killed off?

Yes. I think Lyft and Uber should both die. I think these two companies have ruined the entire concept, and the potential, of ridesharing with their rampant greed. I hate them both, but I hate Lyft more. Why? Because, as I pointed out in the original post, by taking on Uber, they’re making things worse for everybody. There’s really no way they are ever going to beat Uber at their own game. Not with a pink mustache. Not by creating a “community” of drivers. And not with a quirky, fun vibe.

Lyft wants to compete with Uber because they want to be worth billions of dollars like Uber. You can’t really blame them. We all love money. But how can Lyft expect to corner the national rideshare market and make billions of dollars without becoming a generic service like Uber?

Based on my observations over the past seven months as a fulltime driver for Lyft and Uber, the vast majority of passengers aren’t that interested in an unconventional experience. Just a safe one. They want to request a ride from their phones, have the car show up and not deal with cash. Sure, there are plenty of people who buy into the Lyft experience, but instead of cultivating those users, in their ignominious attempt to get a larger share of the rideshare market, Lyft is not the Lyft of old. They are diluting the one thing that distinguishes them from Uber.

This isn’t my crackpot theory. A friend of mine who began using Lyft three months after the app was first released in San Francisco told me recently how disappointed she’s become with Lyft. She’s uncomfortable sitting up front next to creepy dudes. One driver even harassed her a few weeks ago. She says she no longer feels safe using Lyft and has moved on to UberX, where she can at least sit in the back. I told her she could easily sit in back with Lyft but she doesn’t see the point of using Lyft if she isn’t participating in the culture of Lyft.

Other bloggers and plenty of drivers have said the same thing.

And I’m not the only one who thinks that Lyft will lose the rideshare wars. We all know, once the dust settles in the rideshare wars, Uber will dominate the market. And no, I don’t think that’s a good thing at all. But it’s inevitable. If Lyft wants to be like Uber, then Lyft should die and let Uber do Uber. They don’t need Lyft’s help.

Killing Lyft off now would be an act of mercy. Let’s put them out of their misery so we can focus on protesting Uber, creating a TNC union, figuring out the insurance question, getting regulated and trying to increase fares. There are many people doing all these things right now. And current lawsuits against Uber may potentially change the game and take them to task for mislabeling drivers as independent contractors. There is legal precedence that by determining our rates and how we maintain our vehicles as well as limiting our ability to accept tips, they are actually our employers. Uber is fighting this classification tooth and nail because they won’t be able to shirk responsibilities for the assaults, sexual harassment and death caused by drivers. They also know the day is coming when they will be forced to assume the role of a transportation company. This can’t happen soon enough.

There is only one way to ensure the ability for anybody to make money in a car: regulation.

Of course regulation means the death of ridesharing. Because it will no longer be about individuals using their personal cars as vehicles-for-hire to make a few extra bucks on the side. If drivers are required to have permits for themselves and their cars, how many current rideshare drivers would go through that process to continue driving? Very little, I imagine.

Ridesharing is barely in its infancy. And yet it’s already doomed. Why? Because only two companies dominate the field. If Uber and Lyft continue to be the primary players and keep fighting each other for the national market, ridesharing will not advance. The only way to make ridesharing work is to create smaller companies based in individual cites. The technology is there, somebody just needs to build the apps. I think smaller companies could easily gain wide-acceptance in cities by advertising themselves as a local rideshare. Create a cool logo that’s unique to that city, pass out referral cards for free rides at all the bars and clubs, slap a magnet sign onto the side doors, place an emblem in the window and get noticed. It’s not hard to get attention these days. Look at a company like Black Crown Car Service in Seattle. Yeah, I know they’re a black car service, but they’ve proven that starting a car company at a local level can be accomplished. Just don’t expect to become valued at a billion dollars. Or take on Uber.

And yeah, I know SideCar is still a formidable player in the rideshare game. It seems like they’re poised to step into Lyft’s shoes once Uber finally crushes them, or take over entirely if Uber and Lyft do each other in. Their recent deal with SFO shows they are being strategic rather than blatantly fighting regulation and trying to destroy traditional taxi service.

At the end of the day, it doesn’t matter who wins the rideshare wars. If either one becomes victorious, we’ll be right back where we started. In their efforts to destroy “Big Taxi,” Uber or Lyft will eventually become the very thing they aimed to disrupt: taxis. But with a twist: less regulation. So why not open up the market and start more rideshare companies to keep the disruption going?

Lyft and Uber have turned ridesharing into a racket. We use our own cars and assume all the risks and responsibilities to make these companies rich, all the while making less and less each month. And when we fuck up, or when our cars give out, we are cast aside. Neither Lyft nor Uber have any loyalty to us drivers. We are part of a social experiment that will fail. And when it does, the bigwigs at these companies will just walk away with golden payouts and form other companies. Or invest in somebody else’s start-up.

And the drivers? Some will get their TCP permits and go pro. The rest will move onto another side gig. Maybe they’ll have positive memories of their rideshare experiences. But I’m sure plenty will look back with regret.

The ones I really feel sorry for are the Lyft faithful. It’s going to really hurt when they have nothing left from their rideshare experience except a beat-to-shit car, a faded pink mustache and the harsh realization that a corporation they worshiped had just used them up and spit them out.

This very small collection of Facebook comments left by angry Uber and Lyft drivers dates from Fall 2014, when Uber and Lyft lowers prices to the point that many drivers who had been on the platform for over a year or longer felt they could no longer continue to afford to drive for these e-hailing companies.

There have been many price cuts since this one, and many before, but this was the first major reaction to them. 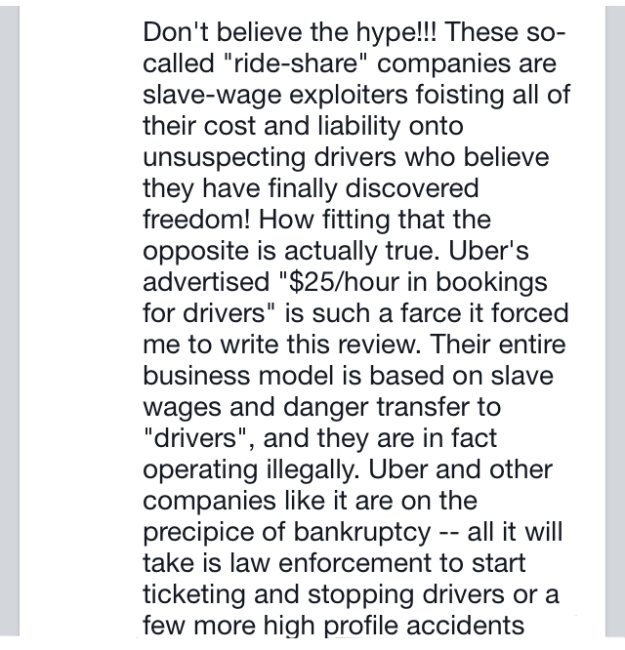 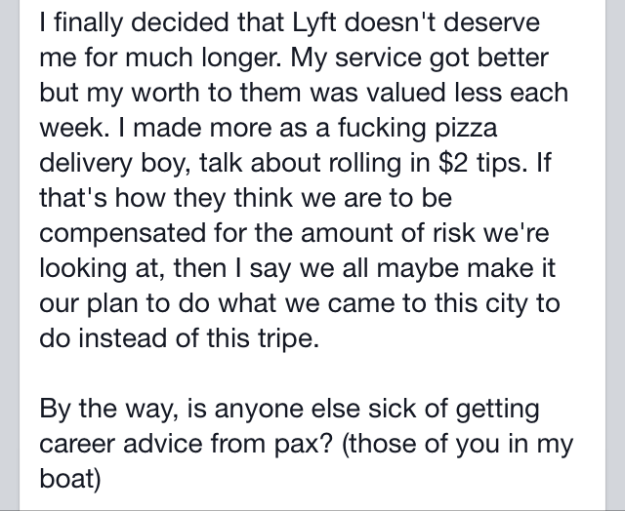