My column for the S.F. Examiner this week is about impersonating a Lyft in a cab…

I was a Lyft driver for Halloween.

The idea came to me at last week’s barbeque. For some reason, driving around San Francisco, picking up fares with Lyft’s iconic trade dress on my cab, seemed like an absolutely hilarious prank. Even if I just caused confusion, at the very least it would be a noteworthy social experiment.

So that Saturday, once it got dark, I fastened the fluffy pink Carstache Lyft sent me when I first signed up to the grill of National 182 and attached the Glowstache I’d received as a top-rated driver to the dash.

I created a Pandora station around The Cramps, Misfits and Ramones.

To augment my trickery, I planned to tell my passengers I didn’t know where I was going and that it was 200 percent Prime Time all night.

I figured everyone would laugh and throw piles of money at me for having such a clever costume.

On 16th Street, a girl dressed as a spider flagged me down.

“Can you take me to Geary and Fillmore, please?”

“It’s easy,” she responded in all seriousness. “I’ll direct you.”

From Japantown, I crawled down Polk Street behind a beat-up white limo. A few cab drivers looked at me like I was committing the greatest sin by “rocking the ’stache,” as they say in Lyft parlance.

Trevor, the Street Ninja, impersonating Travis Bickle, cruised past me at one point cracking up.

I stuck to the more congested parts of The City, where I knew my caricature would get the most exposure. Some Lyft drivers scowled at me. Others blew their horns or flashed their high beams.

The majority of my passengers, though, didn’t seem to notice or care. They just told me where they were going, and off I drove with my mouth shut.

So much for being a friend with a cab.

After dropping off a group of revelers at Bar None, I was heading deeper into the congestion of Union Street with The Stooges’ “I Wanna Be Your Dog” at full blast when a guy darted out of the crowd.

“You!” He pointed at my cab, laughed and jumped in the backseat.

Barreling down Gough, we talked about irony and thrash metal. When I dropped him off on Valencia, he almost took off without paying.

“Hey, I’m only pretending to be a Lyft,” I reminded him.

On my way to the Haight from the Mission with a fare, Other Larry pulled up next to me on Guerrero in Veterans 233.

“Does it ever get old?” the guy in the backseat asked.

On a ride through the back roads of the Western Addition, I tried to explain to another guy the tension between the Smartphone Hailed Internet Transportation Services and cab drivers and why the Lyft mustaches on my taxi were so hilarious.

“You mean you can’t do Lyft in a cab?” he asked. “I always assumed you guys were all the same.”

Sure, the lines are blurry these days: Flywheel is an app and a taxi company; most Uber drivers are Lyft drivers and vice versa; decommissioned Yellow cabs are used as Uber-Lyft cars; Towncar drivers slap fake TCP numbers on their bumpers to access commercial lanes; out-of-town cabs come into The City all the time and pick up street hails; and now Uber-Lyft drivers are putting toplights on their Priuses.

According to a recent study from Northeastern University, the streets of San Francisco are congested with more than 10,000 vehicles for hire on average. During a holiday like Halloween, that number is considerably higher. But only taxicabs are required to follow rules and regulations. Everyone else is free to play make-believe all they want.

It doesn’t even matter if the portrayal is convincing. The general population just wants the cheapest and most convenient ride available. Who provides the actual service, whether they’re knockoffs or the real McCoy, is completely irrelevant. 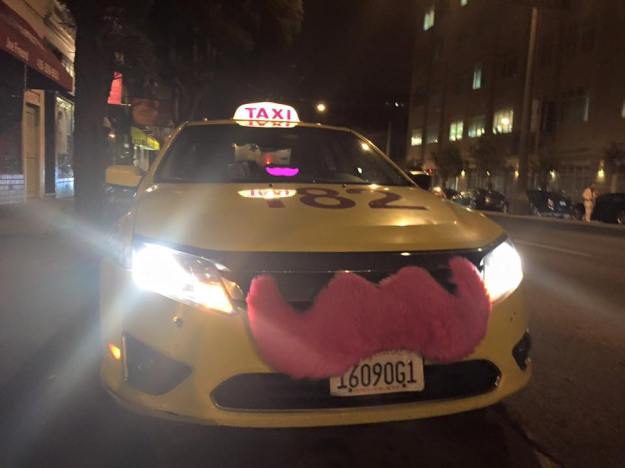 Follow I Drive S.F. on WordPress.com
Join 3,163 other followers