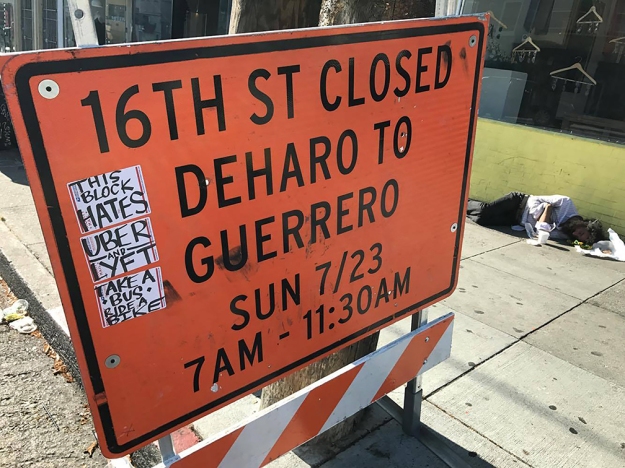 “I’ve been feeling so much better since laying off the drugs,” says Mr. Judy. “I’m on top of my game and totally killing it, man.”

While describing the benefits of a steady diet of poke and quinoa salads in between text messages, I respond with vacant grunts. It’s hard to concentrate on much but the spectacle of absurdity surrounding us.

Traveling eastbound on 16th past Guerrero, we’re trapped behind an Uber/Lyft that stopped suddenly halfway through the block. Even though there’s an open space in front of Katz and vacant parking spots further down the street, the driver just put on his hazards, impeding half a dozen vehicles. Including the 22-Fillmore, which ended up stuck in the intersection once the light turned red. Since the westbound lanes on 16th are clogged with commuters and more double-parked Uber/Lyfts, the entire corridor is on lockdown until the person who ordered this ride shows up.

A salvo of blaring horns does little to dissuade the driver from staging in the flow of traffic.

Finally, Judy looks up from his phone and asks, “Why aren’t we moving?”

“No surprise there,” Judy responds and snuffles twice.

When the light turns green, westbound traffic begins to move slowly. I see in my rearview that the intersection at Guerrero is congested with vehicles that can’t get past the bus.

“These maggots have no respect for anyone but themselves,” Judy continues. “It’s just me, me, me … Someone needs to do something.”

“You’re right,” I mumble, noticing a Sentra in the opposite lane hesitate, giving me a split-second opportunity to bypass the gridlock.

Of course, like most Bay Area drivers, the guy in the Sentra sees my move as an act of aggression and tries to play a game of chicken.

Now, I’m not driving like a maniac for the thrills. Besides thousands of hours of experience working the mean streets of San Francisco, I’m in a multicolored vehicle with a “TAXI” sign on top. Everyone else on the road should just assume I’m liable to do some “creative” maneuvering. But I’m also acutely aware that the thought of a hard-working cabbie doing his job is more than most drivers in San Francisco can bear.

As he lays on his horn, flashes his high beams and screams out his window, I careen through the logjam onto Albion.

“That was awesome,” Judy bellows with laughter.

Compared to the pandemonium of 16th Street, 17th is like Golden Gate Park after hours. At South Van Ness, I go left and take 14th to our destination: Best Buy.

Mr. Judy wants to buy a TV. Part of his new, wholesome lifestyle. No more staying out late at the bars, doing tequila shots and playing pool. From now on, he’s going home at a respectable hour to get enough sleep.

It’s all about reaching his full potential.

Follow I Drive S.F. on WordPress.com
Join 3,145 other followers