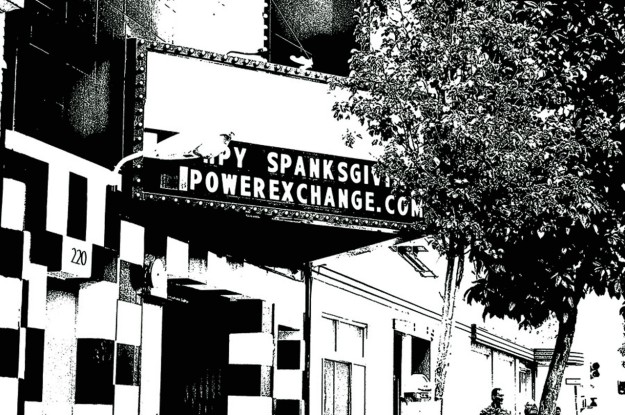 In San Francisco, you might need the right cab driver to get you to the right sex club…

In this week’s column for the S.F. Examiner, I write about getting misguided passengers where they want to go:

I’m cruising down Folsom Street on a quiet Thursday night at about midnight. An arm goes up in front of Powerhouse. I pull over. A man with a strong accent gets in the back of my taxi.

“Can you take me here?” He shows me his phone with the Google details for the Power Exchange on the screen.

As I head up 7th Street, I ask nonchalantly, “Not the crowd you’re looking for back there, huh?”

“Too many problems!” he exclaims. “I’m looking for women.” 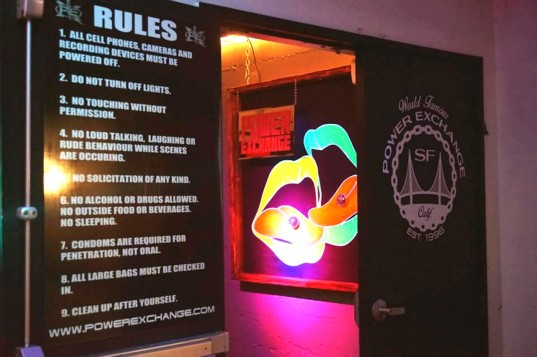 photo of the entrance to the Power Exchange courtesy of S.F. Weekly

Racing through the littered streets of the Tenderloin, I can’t help but wonder how this guy ended up at a gay cruising bar instead of the hetero sex club he was looking for. Poor communication with a cab driver? A mix up in a Google search?

Whatever. These things happen. A few months back, I had a similar situation, albeit in reverse, while driving past the Power Exchange …

A guy flags me down and immediately tells me he’s a tourist and has ended up at the wrong place.

“The doorman told me I should check out Blow Buddies,” he says. “Do you know where that is?”

Of course. I’m quite familiar with the place, I tell him. But instead of assuming that, as a night cabbie, I know where all the sex clubs are in San Francisco — gay and straight — he thinks I’m a regular and grills me on the details.

“It’s all gay, right? Is it OK to just watch? Do I have to take off all my clothes? Are there condoms available? Showers?”

“All I know is that, once you’re inside, they’ll explain everything.”

When I pull up to Blow Buddies, which is a shuttered storefront on a dark street, my misguided fare is understandably nervous. I assure him they’re open and that I’ll wait to make sure. As he enters, he turns to flash me a Cheshire grin and then recedes into the flaming red light.

Two or three weeks ago, I’m heading back to the National yard, about to hit the Chevron on Bayshore, when a tall man runs toward my cab, flailing his hands in the air.

First thing I notice are his pink shorts, white shirt and topsiders. Did he just fall out of a J. Crew catalogue into the industrial part of the Bayview?

I stop. More out of curiosity than anything.

“Hold on, I have a card.” He reads off the address for the Westin by the airport.

As I circle back to the freeway, I ask, “Why are you wandering around the Bayview?”

“We got a little time before we reach your hotel,” I point out.

“Well … I’m only here for one night on business. So I figured I’d head into San Fran, get something to eat and have a couple drinks. My cab driver recommended Polk Street. After getting a decent steak, I walked down to Jackalope. I was smoking outside and this hot chick approached me. She invited me to a bar across the street. A place called Divas. Everything was going great. We were totally hitting it off. Then she wanted to go back to her place. Awesome. We get in her car and start driving. At a red light, I lean in and …” He pauses. “That’s when I figured out something wasn’t right.”

His eyes are full of despair as they meet mine in the rearview, and I quickly stifle my laughter.

“What did you do after that?” I’m almost afraid to ask.

“I jumped out of her car! Just started walking. I would’ve walked all the way back to the hotel. I don’t give a fuck. I was a Marine!”

I’m inclined to tell him it’s not his fault he didn’t know Divas was a transgender bar, but would it even matter at this point?

“I just wanted to have a little fun in San Fran …”

Slowly, his voice fades, and I leave him to his thoughts. He’s got a long night ahead of him, and a long flight back to Detroit, which might be enough time to sort out all these new emotions.

Follow I Drive S.F. on WordPress.com
Join 3,163 other followers