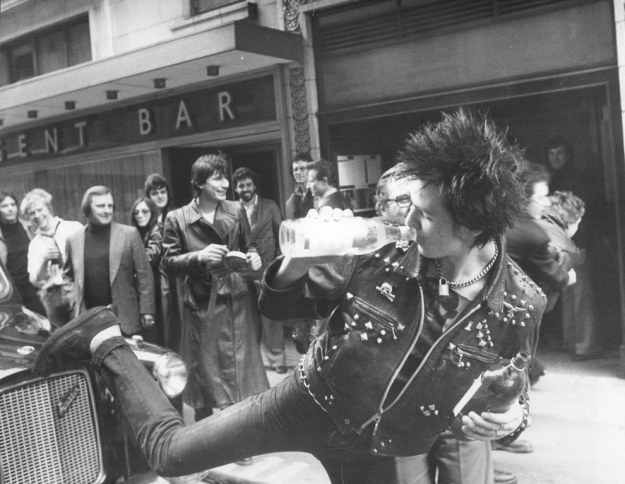 Not to brag, but I totally failed my piss test…

In this week’s column for the S.F. Examiner, I detail the indignities the SFMTA subjects cab drivers to while Uber and Left drivers ride roughshod all over The City.

One of the many perks of driving a taxi in San Francisco is the recently enforced mandatory drug test we must pass in order to renew our A-Cards.

The last time I had to urinate for employment was in 1993, when I applied for a porter position at Martin’s department store in Gadsden, Alabama. Just like then, I’m sure to fail. But this time, I don’t have to drink copious amounts of water for a week and jog around the block three times a day to exorcise the traces of marijuana in my system.

Fortunately for potheads like myself, the San Francisco Municipal Transportation Agency is kind enough to allow a medical marijuana exception. So with a recommendation from the reputable Oakland 420 Doctor, I won’t lose my job.

I chase my coffee with a bunch of water and head out to the MacArthur BART station.

On the train, I get the chatty conductor: “Sit back and relax as we make the smooth move through the groove tube.”

I try to take his advice, but I’m too annoyed about the disruption of my free time. As a taxi driver, I’m an independent contractor.

How can the SFMTA make me submit to a drug test? Moreover, what does it prove? That I have enough self-control to go a few days without smoking crack or PCP?

Since cannabis is the only drug that stays in your system longer than that, and with Proposition 64 on the ballot in November, this drug test is purely a violation of my privacy, another regulatory hurdle to make life harder for taxi drivers while Uber drivers are free to shoot dope in their jugulars in between rides and snort blow off the breasts of their unconscious passengers.

If The City actually informed the public about all the obstacles taxi drivers are subjected to in order to keep them safe, perhaps the hassle wouldn’t be so aggravating. But in the new hypernormal reality, it’s more proof the SFMTA doesn’t give a damn about taxi drivers — except when it comes to selling us worthless medallions for $250,000.

“Live! In San Francisco!” the conductor announces when we hit the Embarcadero station.

I empty my water bottle. I still don’t have to pee, but I’m hopeful I’ll be able to provide an adequate sample. When it comes to releasing bodily fluids, I tend to choke under pressure.

At 16th Street, I take the 55 down to Missouri Street and walk the rest of the way to the clinic on Connecticut.

After filling out some forms, I grab a New Yorker and make periodic trips to the water fountain in the lobby.

Twenty minutes later, I follow a technician into the back. She has me put my possessions in a locker and wash my hands before entering the bathroom. Then she sprays blue solution on the inside of the commode and gives me a beaker, instructing me not to flush.

I stare into the empty container …

A few minutes later, I emerge with half a cup of warm amber.

The technician seems pleased with my sample.

That makes two of us.

Follow I Drive S.F. on WordPress.com
Join 3,145 other followers