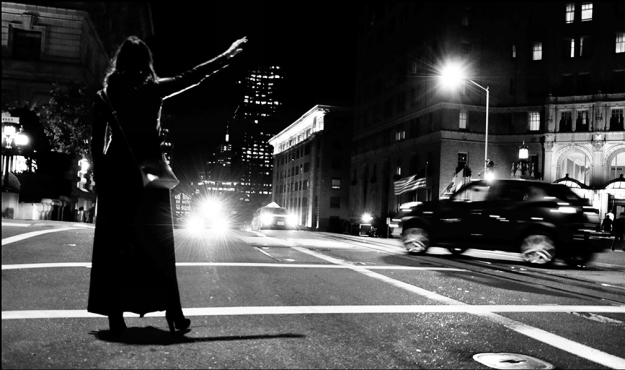 I’ve written extensively about the fear and confusion that defines a particular kind of ride: the intoxicated woman. You got mean drunks and happy drunks. And you have the unknown…

Whether they’ve had too many drinks or had something put in their drinks, women who get wasted in public at night are easy targets for predators.

Even though one of the major selling points of Uber and Lyft is providing safe passage for the most vulnerable, when people are leaving bars and clubs at 3 a.m., they’re not always aware enough to read a license plate, or make sure that the thumbnail in their phone matches the dude behind the wheel of an unmarked sedan in a sea of unmarked sedans.

Lyft’s color-coding system is a step in the right direction, but every attempt they make to implement safeguards only makes them more taxi-like. And since their inception, Lyft has resisted any resemblance to taxis, lest they end up being regulated like taxis.

Last week, in my column for the S.F. Examiner, I wrote about the benefit of taxis in the urban landscape and brought up the proliferation of fake Uber drivers who prey on drunken women and how the Uber/Lyft model seems to encourage predators.

This rubbed a few readers the wrong way. So this week, I decided to double down and explore the problem in more detail.

I’ll never forget my first wasted girl. The young woman was probably 19 – 20 tops. So intoxicated, she couldn’t remember where she lived. Somewhere in the Inner Sunset. That’s all she was able to tell me.

I had just started driving for Lyft and the person who ordered the ride didn’t know her. There was a house party, she must have taken something and, yada yada yada, she was my responsibility now.

I was more than a little freaked out. Especially when her first garbled attempt at an address proved futile and she climbed into the front seat of my Jetta.

At this point, she was bawling nonstop. I was on the verge of hysterics myself. Besides the frantic attempt to get her home, I’d already ended the trip through the app, so it was a free ride.

Forty-five minutes later, to my great relief, she finally recognized her building. I managed to help her inside, with only a few more crying jags between the car and her door.

A few months after that, while driving for Uber, a young woman jumped into my car at Market and Eighth Streets and instantly passed out. When the actual person who ordered the ride called me, I had a momentary panic attack. But I managed to figure out where the woman in my backseat lived and get her home.

Over the years, I’ve found myself in similar situations on numerous occasions. And while I had the routine down to a science by the time I started driving a taxi, the immediate fear that grips you at the onset of these incidents never really goes away.

Most people don’t seem to realize just how vulnerable you are on the streets at night, whether you’ve been partying, or driving for hire.