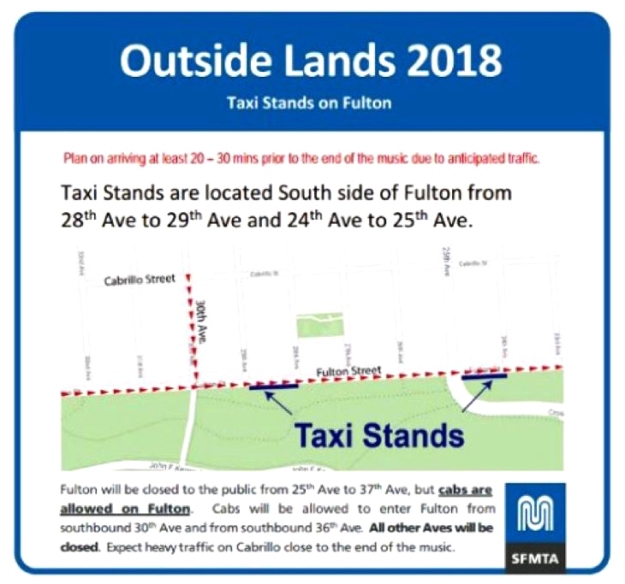 This week’s column for the S.F. Examiner is about working Outside Lands…

Before I can figure out where the shouting is coming from, there are hands reaching for my back door.

“Can you drive us?” The guy’s voice is rife with desperation.

“Thank you so much,” the girl exclaims. “We’re so lucky we found you!”

Once I get their destination, I carve my own route out of the Avenues, zigzagging from Balboa to Anza to Clement, and even up to Lake, trying to avoid the gridlock.

“I don’t do traffic,” I tell my passengers nonchalantly, for effect.

Since this is my fifth year working Outside Lands, I can be a little cocky.

I head to the park around 9 p.m., after steeling myself for the inevitable shitshow and getting my accouterments in order. Energy drink: check. Square reader: check. Gary Numan CD: check.

Unlike in the past, attendees of the music festival this year seem to realize that using Uber or Lyft to get out of the park when the music ends is an exercise in futility. Besides the inevitable surge pricing, anyone with eyes can see the congestion. Well, almost anyone.

On my second foray to the park, a girl frantically waves me down on the corner of 18th and Balboa.

“C’mon! Let’s go!” she tells her friend, standing a few feet away.

“But they’ll charge me five dollars,” her friend whines, holding up her phone.

“I’ll Venmo you the five dollars! Come on!”

I hit the gas. This is no time for indecision.