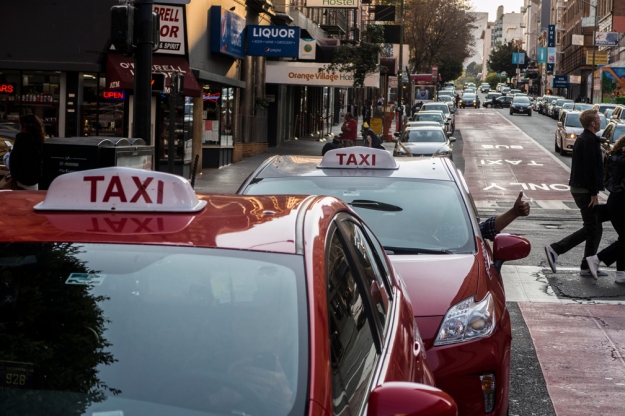 I never thought having a child would help me deal with driving a taxi. But the shrieking of an infant reminds me of those impatient cab drivers who use their horns to communicate …

A few weeks ago, I’m lining up on Market Street waiting for the Orpheum to break.

Several cabs have already queued. I pull behind an unmarked SUV with its hazards on. I don’t know if it’s an Uber, so I keep my distance. A Flywheel cab gets behind me and starts blowing his horn. Several taps at first, but then he really lays on it.

Finally, the guy gets out walks to the front of my cab. He starts gesturing at the space between the SUV and me. In broken English, he tells me to pull up. I try to explain that I don’t know what the SUV is going to do and want to avoid getting stuck. But he keeps shouting at me, so I just move up grudgingly.

He bellyaches all the way back to his cab.

A few minutes later, the show lets out, and people start getting in cabs.

The Flywheel driver, who doesn’t seem to know how to work the theaters, starts blowing his horn again and trying to get around me on the left. I see people get into the taxis in front of the SUV, which, predictably, doesn’t move. As a couple heads for my cab, the Flywheel is angled on my left so that when a lady tries to get into his cab, he’s too far away and she gets into the Fog City behind him.

I hit reverse to move around the SUV to escape the melee.

When it comes to an 8-month-old, screaming pretty much gets the desired result. According to baby experts, she doesn’t understand “No!” yet and, well, we really don’t want our neighbors to hate us too much. For taxi drivers who use their horns to communicate, though, it doesn’t always pay…