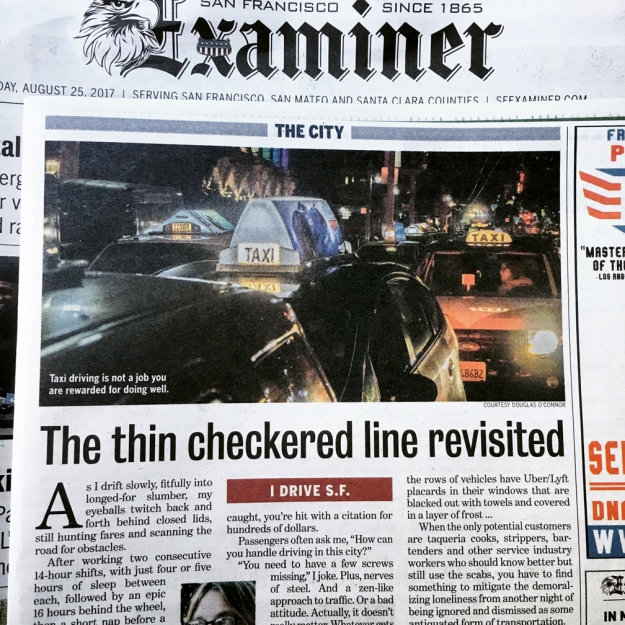 An Argument on Wheels

The other night I’m transporting a bouncer from The Fillmore to his apartment on Leavenworth. We’re inbound on Post when an Uber/Lyft in front of me hits the hazards and comes to a sudden stop.

I slam on my brakes and look in my side mirror. There’s a motorcycle in the other lane but I seem to have enough space to move over.

The biker, however, disagrees. He beeps his tiny horn and screams at me, “Watch out, motherfucker!”

At the light, I roll down the passenger window to apologize but the biker can’t hear me and most likely assumes I’m just talking shit.

It’s an honest mistake, but the guy acts like I’ve committed a capital crime and should be dragged out of my cab and pummeled into hamburger meat on the asphalt.

Now I’m sure the biker’s anger had more to do with the fact that I’m driving a taxi than anything else. Whenever there’s an altercation on the road and blame must be incurred, the easiest target is always the taxi. Not the fucking idiot Uber/Lyft driver who could have easily pulled into an open space to drop his passenger but chose instead to impede traffic since they don’t drive with common sense and just follow GPS directions. They’re not in a taxi, though. Despite the small, barely perceptible Uber and Lyft placards in their windows, they resemble any other vehicle. So they get a pass.

The taxi, though, is the idiot mucking up traffic…

As someone who drives a regular vehicle in the city as well as a taxicab, I’ve noticed over the years how different the two experiences are and how other drivers treat you when you’re driving a cab.

People seem to have this innate hatred of taxis based on the stereotypes that we’re filled with road rage, drive like maniacs and have no respect for anyone else on the road.

In reality, taxi drivers, who log 40+ hours a week behind the wheel, are some of the better drivers on the road.

Along with all the other difficulties of transporting people in an urban environment, there’s the constant disdain from the general public that never once considers the struggles we go through everyday trying to earn a living driving on the mean streets of San Francisco. Which is the topic for this week’s revisited * column…