During the recent hostage crisis in Sydney, due to increased demand, Uber’s surge pricing took effect. Understandably, people wanted to get the hell out of dodge. Fast! Since then, there have been a slew of articles lambasting Uber’s “dynamic pricing” model. Surge pricing, especially during a terrorist threat, always rubs the public the wrong way. And yet, various writers have come to Uber’s defense, arguing that surge pricing is simply an example of supply and demand.

“Uber does not have a responsibility to care about you. Uber is not a government entity, and it is not beholden to the general carless public during an unwelcome drizzle of rain or even a time of great distress.”

Matthew Feeney, with the Cato Institute, the Koch-founded libertarian think tank, wrote on their blog:

“What is great about a pricing system like Uber’s surge pricing is that it allows users who want an Uber ride the most to have it. Prices are a great way of communicating customer preferences.”

Fair enough. In Econ 101, you learn all about supply and demand. On paper, surge pricing makes total sense. But corporate boosters like Feeney are missing some major factors that obviously aren’t apparent from the exalted view of an ivory tower. Namely, Uber isn’t a $40 billion company because it’s the Grey Poupon of urban transportation. Not only do they hope to take the place of traditional taxi service, Uber wants to replace car ownership altogether. How can they do that with part-time drivers whose only incentive to drive is the opportunity to gouge people desperate enough to pay whatever it takes to get home?

The fact is, Uber drivers don’t make shit during regular, non-surge, times. I’ve been driving for Uber long enough to remember when ridesharing was somewhat profitable. Over the course of a year, in order to corner the rideshare market, Uber has maintained a protracted price war with Lyft, Sidecar and even, it would seem, the city bus. Since then, the constant price cuts have made it nearly impossible to earn a decent living as a rideshare driver. Prior to the price wars, I made $800 to $1000 a week driving thirty to thirty-five hours. (Before expenses like gas, tolls, car washes, maintenance, etc.) Now, driving for the same amount of time, it’s more like $400 or $500. If I’m lucky. (Again, before expenses.)

As an Uber driver, you learn quickly that it doesn’t pay to pick up passengers unless prices are surging. There are blogs and even driving coaches who offer to help new drivers figure out the best driving strategies. They all say the same thing: wait for the surge.

Surge pricing is so ingrained into the Uber culture, they are even trying to patent it!

In online forums for drivers, trying to figure out when prices will surge is a regular topic of discussion. So far, the only proven method to ensure getting a ride during a surge is to stay offline and monitor the rider app. Once a part of town lights up, you race there in hopes of getting a higher fare. This is called “chasing the surge.”

Most drivers chase the surge. On Facebook groups, drivers like to post screengrabs of high-ticket fares during price surges. Members click “like” and make comments such as, “Lucky you!” or “I wish I weren’t already in bed or I’d get in my car right now!”

Since surge pricing forces generosity from people who would otherwise not give you a penny more than what the app determines, it’s no wonder drivers revel in it and respond to high fares like they just won the lottery.

By continuing to lower rates, Uber knows the only way drivers can make money is during a surge. When demand is expected to be high or when it spikes, Uber encourages drivers to get behind the wheel by sending texts like this:

From all the comments I’ve seen, most drivers don’t care if passengers have to pay more—or a LOT more—when demand is high. The extra money makes up for all the times people didn’t have to pay much for the luxury of being driven around town, oftentimes receiving water and snacks along the way.

I’ve always been ambivalent about Uber’s surge pricing model. Personally, I’d much rather let the passenger decide how much my service is worth during busier times with a tip. However, despite the extremely vocal complaints of drivers, including protests outside Uber’s offices across the country, Uber will most likely never add a tip option to the app. In fact, this December, Uber added an option for passengers to include a donation to the No Kid Hungry campaign. It was all set up through the app. No disrespect to the No Kid Hungry organization, but if Uber can easily add a feature like this, they could just as easily include a tip option. But they won’t do it because, as they have made it clear over and over, “Being Uber means there is no need to tip drivers with any of our services.”

Regardless of what Uber CEO Travis Kalanick thinks is a better model for transportation, driving is a service-based task. While passengers seem happy to go along with this no-tipping rule, I don’t imagine they would be as comfortable stiffing a bartender or food server on a tip. So why do it to rideshare drivers? It’s not like we’re making more than minimum wage. Unless, of course, the prices are surging.

Why can’t Uber just raise the fares, or lower their cut, and create an incentive for drivers to work all the time? Wouldn’t the supply and demand concept work then as well? On slow nights, when demand is low, most drivers would log out and the diehards would keep driving, thereby leveling out supply.

I may not have an advanced degree in economics, but I know that Uber’s business model is not just unfair to drivers, it’s unfair to riders as well. At some point, most people will realize they’re being exploited. Telling passengers they don’t have to tip their driver and then forcing them to pay more when it’s busy is a seesaw battle of extortion: I screw you when I can and you screw me when you can.

The no-tip aspect may seem like a good idea to the consumer during normal times, but what about when they’re looking at a $100 dollar fare to go a few miles? Suddenly, tossing a few extra bucks to your driver doesn’t seem like that big of a deal anymore. 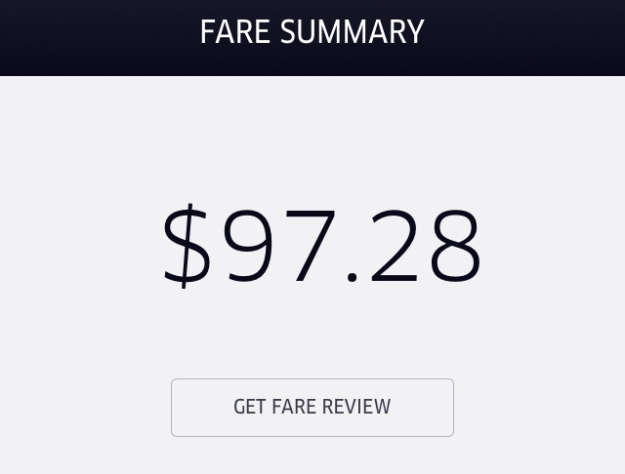 My highest fare… from downtown to the Richmond District in the the rain with 3.4 surge. During non-surge, this ride would normally be around $15.00.

For more nitty-gritty details on the life of an Uber/Lyft driver, check out my blog. Or follow me on twitter.

2 thoughts on “Gouge Away: Uber’s Surge Pricing from a Driver’s Perspective”